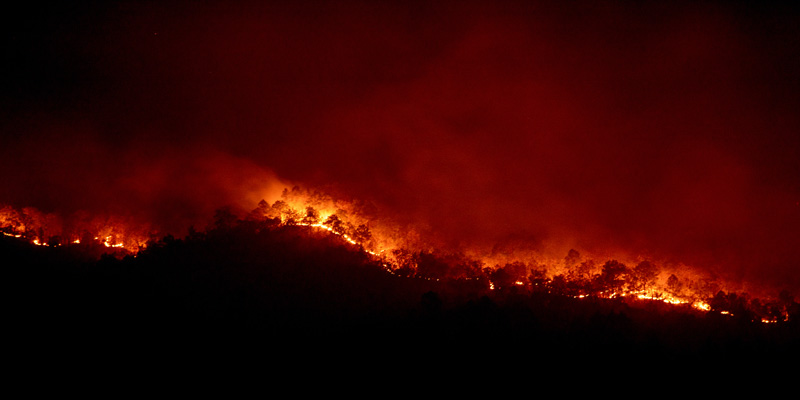 The fires have been raging in Los Angeles. Windy conditions over the past 24 hours have made the situation extremely dangerous and unpredictable, putting more lives and property in harm’s way. Ken Charles is with Entercom in L.A. which owns six stations, including Newsradio KNX. We reached out to Ken and asked him about how his team is covering the fire.

Radio Ink: Is everybody on your team/the cluster safe from the fire, or have they had any damage?
Ken Charles: Thankfully everyone is safe and no one had damage from this round of fires. Some of our team had to be evacuated from their homes because the fires were close, but their families are safe and their homes were undamaged. Definitely a scary situation. Not everyone was so lucky. As of now, the fire has destroyed 12 homes and damaged five others. It’s burned approximately 656 acres with only 15% containment. We are expecting what is being called “extreme red flag warning winds” tonight after 11 p.m., which means “conditions are as dangerous for fire growth and behavior as we have seen in recent memory due to strong winds, very low humidity, long duration and very dry fuels.” Those extreme winds mean anything is possible in the next few days. They’ve just announced the cause of the Getty Fire is a tree limb blowing into a power line and causing the fire. It is being called “accidental.”

Radio Ink: Why is it so hard to put these fires out?
Ken Charles: The hundreds of firefighters and first responders are true heroes! They are working around the clock in 24 and 48 hour shifts doing everything they can to fight these fires. They are in hilly areas with deep dry brush. Conditions are dry with low humidity. Because of all these variables, the mayor said early on this fight was going to take days. It has. With the winds expected to grow tonight and remain through Thursday evening it just makes the situation more tenuous for this fire and the potential for others. They are throwing everything they have at these fires. Their dedication and hard work under extreme conditions is nothing short of amazing.

Radio Ink: What are your stations/your team doing for coverage?
Ken Charles: The Tick Fire began Thursday in Santa Clarita and grew very quickly. On KNX we went wall to wall with coverage of the fire, evacuations, the closure of the 14 Freeway and stayed with coverage into late Friday afternoon as evacuations began to be lifted, and Saturday as people began to get back to their neighborhoods and homes. Our FMs and digital teams were right there with us sharing information and pointing listeners to KNX. Then, very early Monday morning, the Getty fire broke out and our teams mobilized and began deploying reporters to the scene and gathering information on-site and in the studio. We have a team of dedicated professionals with years of experience covering these types of fires so they know where to go, who to talk to, and how to best get that information to our listeners. Our FM stations also have professionals who have lived in Southern California for a long time. They know how to jump on the situation to get important information out to their listeners. Plus, they have been pointing listeners to KNX, talking to our reporters on the scene and using our information to keep their audiences informed. Our digital teams have been equally amazing getting maps and complete information on evacuations, closures, and shelters up on knx1070.com, the Radio.Com app, and our social channels to keep people informed and up to date.

Radio Ink: Are you doing a lot of interviews/phone calls with listeners or residents close to the fires?
Ken Charles: Some via phone, and of course we are able to use social media to reach out to people and get their stories. But primarily it is our reporters in the field talking to people in their neighborhoods and at the Red Cross shelters.

Radio Ink: How would you say your people are doing with their coverage?
Ken Charles: KNX has the most experienced news team in the business. Pete Demetriou has been covering Southern California for over 40 years, in fact I believe his 45th anniversary is this week. No one has more experience covering these types of events than Pete. Our entire reporter and anchor teams have similar experience covering way too many events of this type. All of them bring years of experience telling these stories and knowing how to get the most important information to the public as quickly as possible. Our editors, producers, and writers have decades of experience covering Southern California wildfires. From the first call at 1:30 a.m. they went right into fire mode, ramping up our coverage as the potential for this fire grew. They are committed to not only telling the story, but doing whatever it takes to get the information out to our audience to help save lives. I have never been more proud of the people I work with. Every time another major story like these fires breaks they always impress me with their commitment and dedication to our audience because this is their home too. (Listen to KNX live on Radio.com here.)

Radio Ink: How does this compare to other major events you’ve covered?
Ken Charles: I’ve covered way too many hurricanes, tornadoes, blizzards, floods, and wildfires. Each one is unique and each one presents different challenges. Each time I am amazed at the dedication of the professionals I am blessed to work with every day.