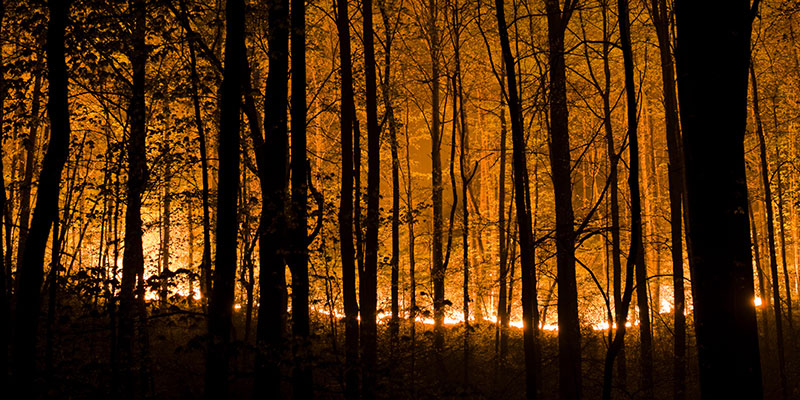 Stations in California, Montana, Oregon and Washington became communities’ eyes and ears during catastrophic wildfires. They will be honored at the National Association of Broadcasters Education Foundation Celebration of Service to America Awards gala June 12.

On an early September day along Oregon’s Eagle Creek Trail, a teenager tossing fireworks ignited a fire that would ravage the landscape for days. A spark along this popular hiking path in the northern part of the state Saturday would, by Tuesday, become an inferno, stretching into Washington state, with 32,000 acres of charred land behind it.

With the fire spreading so rapidly — doubling in size between Monday and Tuesday — and conditions constantly changing, the team at Tegna’s KGW station, based in Portland, knew residents needed information quickly as a matter of public safety. Though the news broadcast at 5 p.m. would provide a critical moment to update viewers, people needed to know the conditions in real time. Understanding the urgency, KGW’s staff worked overtime to ensure that the latest information was available on every platform, from TV to the station’s website to all social media platforms.

“During fires, information changes so quickly, letting people know what’s happening, as it’s happening, is essential,” said Greg Retsinas, the station’s director of digital strategy. “We know that during the day, people are on their phones. The more information we can share via social media and our digital platforms, the more useful we are to them.”

In California, as historic fires blazed, traffic reporters flew helicopters into the smoke to provide the community street-by-street information.

“That’s what I’m here for, to help people,” Burt said in an interview with The New York Times.

KGW and KTLA are just two of many broadcast stations up and down the West Coast that provided communities with continuous coverage of the catastrophic wildfires that raged across the region last year. Broadcasters all along the West Coast donned protective gear so they could safely and effectively gather the information communities needed to understand the dangers associated with these wildfires. They left their own families behind, embedded with fire crews and working long shifts, sometimes overnight, to cover these stories exhaustively.

The 2017 wildfire season was one of the worst on record, with the U.S. Forest Service spending more than $2 billion to fight the flames. From June through the end of the year, wildfires burned throughout the western United States. Nationwide, 66,000 wildfires burned over 9.7 million acres of land, an area roughly 10 times as big as the state of Rhode Island.

Taking to the Skies

To get accurate, timely information to residents in the path of fires, broadcasters used helicopters and drones to track the events from above.

ABC7 in San Francisco leveraged a new technology to further enhance its helicopter coverage of the North Bay fires. The technology, called SkyMap7, geolocates streets, highways and landmarks over aerial footage. The station used it to show street-by-street coverage of the fires’ devastation.

For the Oregon fires, KGW used drones equipped with high-resolution cameras to broadcast live video of the catastrophe on Facebook, YouTube and Instagram as well as helicopter coverage for live aerial views on all digital and social platforms.

“People wanted to know if their favorite hiking trails survived the blaze. Drones let us show what areas of Eagle Creek Trail had burnt, without endangering any of our staff,” Retsinas said.

The station’s use of Facebook and Instagram provided local residents verified, up-to-the minute information on those platforms, allowing people to follow the fire no matter where they were.

Another critical role during natural disasters is myth busting. At one point, a false rumor spread rapidly through social media that the fire had destroyed an iconic lodge in the Columbia River Gorge. Reporters were quickly able to assure community members that the lodge was still intact.

With rumors spreading and the fire moving quickly, KGW worked diligently to get the story right. Whether in moments of crisis or calm, broadcast stations strive to provide accurate, timely news to their communities.

To do so, Retsinas said, his station relied on the relationships reporters had with local officials and residents — connections that take decades to cultivate.

“We’re right here in the community. The local officials managing fire lines and evacuation reports are people we know and have worked with for years. We know and respect them. They know and respect us. That makes a difference.”