KTSF-TV Produced PSAs in Five Languages to Promote the Economy 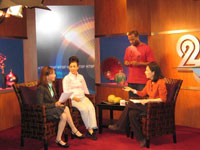 KTSF-TV in San Francisco, Calif., produced public service announcements (PSAs) in five languages to inform new immigrant job seekers about Upwardly Global, a non-profit organization that helps immigrants find professional jobs. The PSAs, which are airing in Arabic, Tagalog, English, Cantonese and Mandarin, are broadcast nine times each week to the 1.4 million Asian-Americans throughout 10 Bay Area counties KTSF serves. Upwardly Global has seen a direct correlation between the number of applicants for its services and the stations on-air support. "The challenge is getting word out to this group that we are here to help," said Outreach Coordinator of Upwardly Global Francie Genz. "The airing of the announcements during different ethnic programming has dramatically helped." The station has committed to a year-long campaign in support of Upwardly Globals effort to help immigrant professionals rebuild their careers.