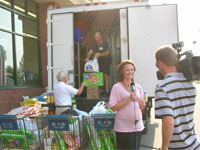 Its a baby shower on a grand scale, and KIVI-TV in Boise, Idaho, is the host. At the stations inaugural "Community Baby Shower," more than 1,800 items  including clothing, blankets, diapers, wet wipes and formula  were collected for struggling families with infants. KIVI evening anchor Michelle Edmonds spearheaded the event, and the station broadcast live from different drop-off locations throughout the day. KIVI invited viewers to the shower by distributing posters and fliers, as well as running promotional announcements on KIVI and six local radio stations starting 10 days before the event. The station worked with three charity organizations, including the United Way, to distribute the donations and ran a "Three Degree Guarantee," where a monetary donation was made by the station for each newscast that Scott Dorval, KIVI chief meteorologist, was off in his forecast by three degrees in either direction.