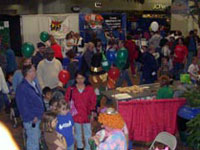 KIMT-TV in Mason City, Iowa, works to inspire its community to get involved with good causes through its "Giving Your Best" campaign. The campaign, which launched in 1997, supports several outreach efforts for nonprofits. Twice each year, it funds and organizes a family fair where thousands of residents have the opportunity to learn about local organizations. Every month, it awards someone who exemplifies volunteerism, getting the word out about the good deed through news stories and repeated vignettes. Since many teachers spend their own money to keep their classrooms going, the campaign started "Tools for Schools," which donates durable goods, such as white boards and books, in response to letters students send in nominating their classroom. The station supports "Giving Your Best" with more than $1 million worth of air time each year. "The campaign acts as a catalyst to change things for the better," said KIMTs Steve Martinson.