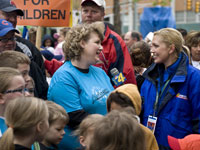 Turning a tragic event into an inspiring memorial is something that KFOR-TV in Oklahoma City, Okla., does each year when it airs a live broadcast of the Oklahoma City Memorial Marathon. The more than four-hour special not only allows family and friends throughout the nation to see their loved ones on the course, it also provides tribute to those who were killed and those who survived the 1995 bombing of the Alfred P. Murrah Federal Building. The race acts as a fundraiser for the privately funded Oklahoma City National Memorial and Museum. In 2007, 16,000 runners participated, raising a record $350,000 for the memorial and museum. Along the course, 158 banners are placed, one for each person killed in the bombing. KFOR conducts interviews with families, survivors and teams running in remembrance of lost friends, loved ones and coworkers. The station also produces and airs spots encouraging people to train for the marathon and promoting participation of little athletes in the Kids Fun Run. In addition to the strong on-air support, six KFOR staff members ran the last marathon. "The station has been with us since the beginning," said Kari Watkins, executive director of the Oklahoma City National Memorial and Museum. "The race represents hope  something fun from a tragic event. The marathon program KFOR produces and airs is an amazing contribution to the city and the nation."