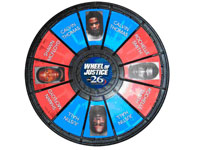 Within a week of WGNO-TV, New Orleans, La., launching "Wheel of Justice" and "Crime Tracker," two new segments focused on bringing the community together to fight the rising tide of crime in the area, two featured suspects were behind bars. The station launched both initiatives to take an active role in making the city safer. On Mondays, Wednesdays and Fridays, the police chief comes into the studio and spins the "Wheel of Justice" for the 10 p.m. newscast. The wheel features the names and photos of four wanted criminals, and details are given about the suspect the wheel lands on. This information is also turned into a 10-second spot that plays regularly. Viewers are asked to call the station, the police or Crime Stoppers with any information. On Tuesdays and Thursdays, the "Crime Tracker" segment maps where crimes and acts of violence have been committed, calling residents attention to safety issues within neighborhoods across the region. As part of "Crime Tracker," the station also has called upon an experienced local bounty hunter to assist in the investigation of crimes and capture of suspects. "We recognize that the people of metro New Orleans want more done (to battle crime)," said Larry Delia, vice president and general manager of Tribune Television New Orleans. "Were taking the initiative to join the community and make change happen that will benefit all of us."