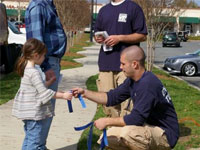 When two police officers were fatally shot in the line of duty, WBT-AM in Charlotte, N.C., broke into programming to provide commercial free-coverage of the news. Later that day, hosts Jeff Katz, a former officer himself, and Tara Servatius did special Sunday talk shows. Then, to help the community heal and to pay respect to the fallen, WBT set aside two afternoons to air the funerals and eulogies of CMPD Officers Sean Clark and Jeff Shelton. Still wanting to do more, the station launched the Blue Ribbon Campaign, providing listeners a way to show their support to police officers throughout the city. The station kicked off the effort with a one-day event, where remotes were set up in two locations and blue ribbons were given away. For the next six weeks, ribbons were distributed through multiple stops by the WBT team throughout the community. In tandem with the campaign, Katz asked the community to provide financial support to the families of the slain officers and the Fraternal Order of Police Lodge No. 9. Listeners came through with $50,000 in donations. On the one-year anniversary of the policemens deaths, The Jeff Katz Show broadcast a three-hour roadside remote, where the station passed out additional blue ribbons to listeners, and Clark and Shelton were remembered. In total, WBT has given out more than 100,000 blue ribbons.