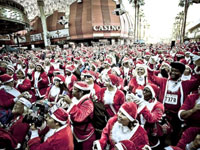 Mrs. Claus wouldnt have known what to do. "The Great Santa Run," an annual fundraiser for Opportunity Village sponsored by KVVU-TV in Henderson, Nev., reined in more than 7,200 runners clad in red hats and white beards, a number high enough to break the world record for the greatest number of Santas in a single place. Opportunity Village, a nonprofit organization that provides vocational training, job placement and social events for people with intellectual disabilities, partners with KVVU for the race as well as other fundraising activities throughout the year. In addition to creating a public service announcement (PSA) campaign for the most recent run, the station integrated coverage into all of its newscasts. Representatives from Opportunity Village were interviewed numerous times on the air, and on race day, KVVU talent hosted the run, which raised more than $360,000. After the event, the station produced thank-you PSAs for all of the Santas and aired follow-up features for a week. "Its a major undertaking, and without the support we receive from KVVU, I dont think we would be half as successful," said Holly Spoor, resource development director for Opportunity Village. "They never lose sight of the Opportunity Village message. Their support is phenomenal." On a related note, KVVUs chief meteorologist recently hosted the Opportunity Village Celebrity Poker Tournament, which raised $100,000 for the organization.