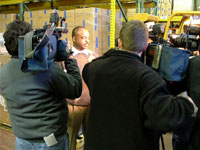 WYPX-TV in Guilderland, N.Y., harnessed the power of television to help a local foundation make a difference thousands of miles away in Africa. When the Joshua Foundation of New York first approached Chris Iorio, production manager and public affairs director of Ion Media Networks, of which WYPX is a part, it had delivered $1 million worth of critical medical supplies to Uganda, Kenya and Tanzania, and was ready to embark upon a similar mission for Ghana and Malawi. With the help of a comprehensive marketing campaign launched by Iorio, the foundation raised enough funds to deliver $7 million worth of medical supplies during this second endeavor. The campaign included the production of public service announcements, which WYPX distributed to other broadcasters both locally and nationally, news coverage, press releases and two special editions of the stations half-hour talk show "Subject Matters." A press conference at the send-off allowed the community at large to see how their generosity made it possible for boxes upon boxes of medicine to make it to those that might not otherwise survive. "I saw a great need, children and adults dying because they do not have the access to our prescriptions drugs, drugs that we may take for granted," Iorio said. "Being involved in the art of television production and broadcasting, I felt a need to utilize this gift to help make a difference in the lives of others."