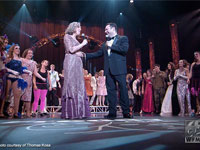 Its show time! Every year, WFMZ-TV in Allentown, Pa., partners with the State Theatre Center for the Arts for the Freddy Awards, a full-blown show modeled after the Tony Awards that features high school musicals and student performers. The program was developed to encourage excellence in the performing arts. More than 26 high schools participate in the annual competition, which culminates in a live, three-hour telecast during primetime on WFMZ. Chief Meteorologist Ed Hanna co-hosts the show, complete with ensemble performances and acceptance speeches. Two significant college scholarships are awarded to students. The dedication of WFMZ staff, who work overtime and on their own time to make sure the quality of the show is nothing short of flawless, is notable. A network level production truck is brought into the area for three days of rehearsals. The news crew follows the entire story, starting with the announcement of the nominations and finishing with recaps after the show. The Freddy Awards receive multi-media support, including a dedicated section of the station Web site where the live show is streamed and videos are posted of high school performances prior to the awards ceremony. "Since beginning the Freddy Awards, we have seen a consistent increase in the quality and commitment to local high school theater in the viewing area," said WFMZs Barry Fisher. The Freddy Awards won the 2007 Associated Press Award for Public Affairs and has been honored with four Pennsylvania Association of Broadcasters awards and an Emmy for Outstanding Performing Arts Programming.