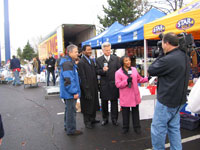 When flooding devastated a large area in the southwest portion of the state in December 2007, KOMO-TV in Seattle, Wash., quickly organized an emergency drive. The one-day event, for which the station partnered with the Salvation Army, lasted 17 hours and brought in $180,000 in relief supplies and monetary support. During the drive, the station broadcast live from the collection site. All of its news anchors were there, unloading cars that pulled up with donations. One woman drove up with animal feed and new blankets. She said her husband had died earlier that year, and she could think of no better way to spend the money that would have purchased his birthday and Christmas present than to help those now in need. It is a moment that has stayed in the minds and hearts of KOMO staff. A week after the emergency drive, the station broadcast a 30-minute news special about the flooding. At the end of the program, KOMO shared with its viewers that there was still a great need for donations and directed them on how to give. The news special raised an additional $46,000.