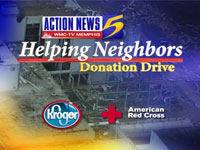 When dozens of viewers homes were hit by a tornado in February 2008, WMC-TV in Memphis, Tenn., stepped up to help the families recover from the storm. The morning after the catastrophic weather, WMC launched the "Action News 5 Helping Neighbors" fundraiser in partnership with the Mid-South Chapter of the American Red Cross. The campaign kicked off with a day-long event at two locations close to the damaged area with live cut-ins at the top and bottom of each hour. At the event, the station also provided free weather radio programming to protect viewers from future storms, a service WMC offers to local residents year-round at the station. News coverage and public service announcements helped raise awareness about the effort and directed the community to the Red Cross phone bank to make pledges. The effort raised thousands of dollars for local victims. A short four months later, when tornadoes hit the towns of Earle, Arkansas and New Albany, Mississippi, WMC-TV quickly organized efforts again, this time holding a one-hour telethon. The live special brought viewers the very personal and human side of the story, providing firsthand accounts of the destruction and interviews with the Red Cross about what was needed for recovery. Viewers were once again directly to the Red Cross phone bank where they generously gave to their neighbors.