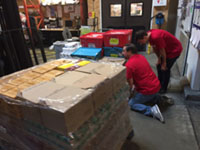 Cox Media Groups CBS affiliate KIRO-TV Seattle anchor Jesse Jones delivered a truckload of groceries and supplies on Aug. 24 to a command center in Okanogan, WA, as firefighters battled the largest wildfire in state history. Jones realized that in addition to food, the volunteers needed gas cards for travel and to run generators. On Aug. 27, Jones collected gas cards for residents and volunteer firefighters, many of whom worked for 14 days straight. Jones also teamed with iHeartMedias KBKS-FM Tacoma personality Bender to raise more than $13,000 for firefighters and evacuees. This powerful video shows how the community benefited from Jones efforts.