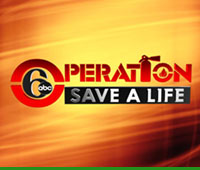 ABC-owned WPVI-TV Philadelphia partnered with local firefighters on Operation 6abc: Save a Life, to educate viewers on fire prevention and distribute 10,000 smoke alarms low income, elderly and other residents. The alarms contain a battery proven to last a decade. In 15 years, Operation 6abc: Save a Life has distributed nearly one million smoke alarms. WPVI also produced PSAs that aired in January.