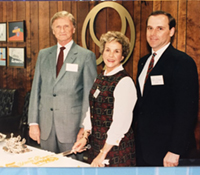 Heartland Medias NBC affiliate WTVA Tupelo, Miss. started as a dream of broadcast engineer Frank Spain, who wanted to build a station in his hometown. He spent three years designing and building the antenna, transmitter and cameras from scratch in his garage. The station went on the air in 1957 as WTWV and soon produced numerous firsts for Mississippi commercial television. It was the first to devote its entire daily morning schedule to educational programming; the first to broadcast a live basketball game; and first to air a live telethon for an entire broadcasting day, raising money to fight cerebral palsy. It switched its call letters to WTVA in 1979. Spain served as CEO until his death in 2006.