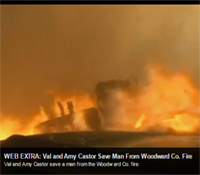 A news crew from Griffins CBS affiliate KWTV Oklahoma City rescued a man stuck in a rapidly spreading Oklahoma wildfire on April 5. Val and Amy Castor were reporting on the fire when they saw county worker Jason Perks frantically attempting to remove his truck from a ditch. They continued filming as they urged him to hurry up and escape the fire. "Ive seen a lot of fires. Ive never seen a fire move as fast as this one did," Val Castor later said. "Im thinking hes going to be in trouble in just a minute if he didnt get out of there ... my window of opportunity to go in there and get him was getting smaller and smaller." Perks freed himself and sprinted to the Castors truck. All three survived. Watch video.