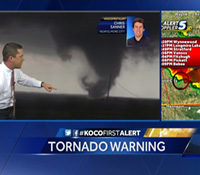 Local broadcasters provide lifeline emergency weather coverage as tornadoes touched down near Oklahoma City on May 9. The E4 tornadoes, with winds at 166  200 miles per hour, killed at least two people and destroyed multiple homes, barns and other structures. Below, here is a sample of the coverage from Oklahoma broadcasters: