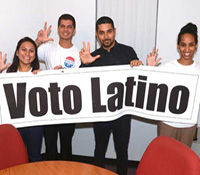 Univision has drawn 100,000 people to 145 citizenship workshops, forums and voter registration drives across the U.S. as it aims to register three million new Latino voters this election season. Univision launched a PSA campaign in English and Spanish on its 126 television and radio stations. Its new election-based texting tool has 130,000 subscribers from all 50 states.