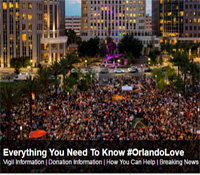 Radio Ink and Inside Radio provided details on broadcast radio stations response to the tragedy. CBS Radio brought personnel from all of its morning shows to help WQMP-FM and WOMX-FM Orlando. As listeners asked how they could help, CBS provided information on where to donate blood.

iHeartMedia Orlandos WFLA-FM, WXXL-FM, WJFF-FM and WYGM-AM preempted programming to air extensive news coverage produced by WFLA-FM and partners WOFL-TV and WESH-TV. "The LBGT community is well represented within our on-air talent and so there was poignancy to many of the talent exchanges," iHeartMedias Chris Kampmeier said. He added that radio has a unique ability to "allow and embrace listeners calling in to share their feelings and any direct knowledge of the situation they may have... They want to feel like they are part of the community and being on the radio and/or hearing those who are helps everyone feel connected and involved."

"Watching radio doing just that with its audience during such heartbreak these past few days was another reminder of the value of our storied industry and why radio talent matter," Cumulus and Westwood One Vice President Lori Lewis told All Access. "The Orlando radio market, along with cities across the country, shined in the darkest times."

"Where radio distinguishes itself and what truly spotlights its niche among all media is/was and will continue to be, its distinct ability to reach out, dig in and be part of the community," said Radio Ink Publisher Deborah Parenti.

"We knew that this story would capture the community, the state, and the nation and we wanted to provide a way for listeners to learn, share, and connect with each other and with our on-air team," said Operations Manager Drew Anderssen. "[We were] getting very diverse calls, most from concerned listeners who want to be able to contribute in some way to the needs of the community. Many are sharing their stories from loved ones and their families/friends."

We are an extension of the community and we are here for our listeners to vent, cry and share their feelings, WQMP-FM and WOMX-FM Program Director Dennis Martinez told Inside Radio.