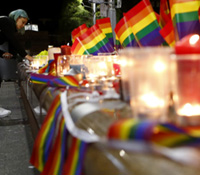 Cox Media Groups Orlando stations broadcast and streamed on June 13 a two-hour roundtable discussion "Orlando Terror Attacks. Our City Reacts," during which on air hosts discussed the massacre and took calls from listeners. WWKA-FM and WRDQ-TV will host abenefit concert on June 21 for the City of Orlandos OneOrlando Fund.

OTA Broadcastings MyNetworkTV affiliate KMIR-TV Palm Springs, Calif. invited the public to attend a special live event "Standing United," held June 17. The Palm Springs mayor, LGBT and Islamic officials, and other local faith and community leaders will participate in the event. "Standing United" will air with no commercial interruptions and stream live on KMIR.com and Facebook LIVE. "We heard the community loud and clear at Sunday nights vigil in Palm Springs," said KMIR News Director David Reese. "They want to come together after this tragedy and KMIR News is committed to doing our part to make that happen."