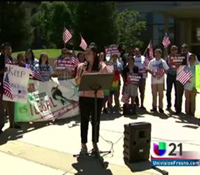 Univision News reported from Orlando within hours of the Pulse shooting, providing coverage on television, radio and digital platforms. A special digital report "49 víctimas del odio (49 victims of hatred) launched on June 17. The exclusive report Inside the house of Omar Mateen was picked up by media organizations in the U.S. and all over the world, including in Italian and Dutch. Univision Puerto Rico aired the hour-and-a-half special Unidos por Orlando (United for Orlando) on June 17. Univisions news magazine show produced Aqui y Ahora (Here & Now); Terror en Orlando (Terror in Orlando) on June 19 and El Omar Que Yo Conoci (The Omar I Knew) on June 24.