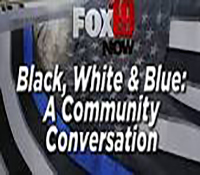 Raycom Medias FOX affiliate WXIX-TV Cincinnati broadcast Black, White and Blue: A Community Conversation on July 15 following the deaths of two unarmed black men in in Minnesota and Louisiana. The special focused on topics such as policing with body cameras, race and justice. As part of the project, activists, city leaders and former law enforcement officers came to the station to discuss the nations toughest questions and how those issues are felt in the community. Viewers also interacted via social media.