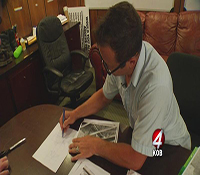 Hubbard Broadcastings NBC affiliate KOB-TV Albuquerque aired a story 4 Investigates: Whistleblower Says City Ignores Code Violations in New Home Construction after a whistleblower alerted the KOB investigated the problem that potentially affects thousands of new home buyers in Albuquerque are getting ripped off. Structural engineer Brian Seylar, who worked for the citys code enforcement department, said too many homes that are not up to code pass inspection. Subcontractors fail to account for critical pieces of wood and nails that help distribute the weight of the roof, eventually leading to cracks and leaks. Seylar was fired after he shared his concerns with his superiors at city hall.