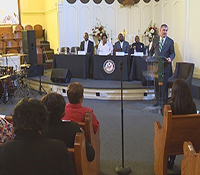 On July 7, a sniper opened fire at a protest in Dallas against police violence, killing five officers and wounding seven others. This shooting came within days of violent incidents in Minneapolis and Baton Rouge. Local broadcasters immediately provided wall-to-wall coverage of the situation and forums for solace and discussion in the weeks that followed.

All Access reported that some journalists used their personal vehicles or Uber to travel to the scene and were not able to leave because the crime scene was still active. The staff remains committed to serving the people of Dallas-Ft. Worth, Service Broadcastings KKDA-AM Director of Operations George Cook told Inside Radio. I am very proud of the efforts under pressure demonstrated by the K104 Family and the KRNB Smooth Crew.

- iHeartMedia Dallas also re-imaged to include #DallasStrong on digital platforms.
- Cumulus Medias WBAP and KILF-AM went commercial-free and pulled all contesting, jingles and station imaging. Radio Ink interviewed Program Director Tyler Cox about the stations approach to coverage.
- CBS Radios KRLD-AM Dallas aired a special edition of Weekend Roundup entirely devoted to the Dallas shootings and the recent police shootings of black men in Baton Rouge and Minnesota.
- ABC aired "America in Crisis: Ambush in Dallas" and a special edition of "20/20."
- CBS "48 Hours" aired a special, "Bringing A Nation Together."
- According to RBR, Radio One, Inc. stated that it is deeply saddened and troubled by the recent events in our country. There is no doubt that this is a critical moment in our history.
- A CBS journalist filed a report while down, almost on his stomach. Another was so close to the site where a bomb detonated early on July 8 that viewers could hear the explosion. It was a pretty harrowing experience but we got solid coverage, said CBS Dallas President and General Manager Gary Schneider told Broadcasting & Cable.
- Watch video here from CBS News Dallas correspondent Manuel Bojorquez, who was a short distance away when the gunman opened fire.

Television Stations that held town hall meetings to address racial tensions include:
- TEGNAs ABC affiliate WFAA-TV Dallas on July 16. WFAA also raised $716,000 for the fallen officers in a Stand United campaign.
- Cox Media Groups CBS affiliate KIRO-TV Seattle hosted, aired and streamed a one-hour conversation on July 13.
- TEGNAs ABC affiliate KVUE Austin aired a video on Facebook, getting almost two million views.
- Raycoms Fox affiliate WXIX Cincinnati aired special reports and programming throughout the day on July 15, including an hour-long special, Black, White and Blue: A Community Conversation. Activists, city leaders and former law enforcement officers came to the station to discuss the nations toughest questions and how those issues affect Cincinnati.
- Scripps ABC affiliate WXYZ-TV aired Detroit 2020: Unify Detroit on July 14.
- Raycoms CBS affiliate WAFB Baton Rouge held a town hall: Where Do We Go From Here?
- TEGNAs CBS affiliate KHOU-TV Houston hosted a town hall, Courageous Conversation. It was intended to last an hour and a half, but continued for four hours.
- Manship Stations ABC affiliate WBRZ Baton Rouge raised $185,000 in the Unite for Our Heroes Telethon on July 28 on WBRZ, WBRZ.com, and Facebook Live to benefit the families of the officers and deputies who were killed or injured. During this tragic time for our community, we were just trying to find a way, like so many others, that we could help, said Director Jake Manship.
- TEGNAs NBC affiliate WGRZ-TV Buffalo aired a half hour special and moderated a on July 18.
- ABC-owned KGO-TV San Francisco hosted a two-hour live town hall A Bay Area Conversation.
- Hearsts ABC affiliate WCVB Boston aired 5 On: Race in Boston July 14.
- TEGNAs ABC affiliate WZZM-TV Grand Rapids, Mich. used the morning drive to hold a community conversation with a project called LOVE/Hate.
- Bounce TV and one of its founders, Martin Luther King III, launched an on-air and online initiative asking the Justice Department to require that local law enforcement be trained in de-escalating incidents with African Americans.
- TEGNAs CBS affiliate WUSA Washington aired Race: An Honest Conversation for viewers to discuss the shootings in Baton Rouge, Minneapolis and Dallas. They used the hashtag #9TalksRace.

- Alpha Medias KMKT-FM Dallas organized a Stop the Music, Stop the Violence community conversation at its headquarters on July 8 and a forum on July 15. The program aired on WFXE-FM, WOKS-AM, WKZJ-FM, WIOL-FM and WEAM-FM. The purpose is to open up the phone lines to have a real conversation with the listeners and the citizens of Columbus, Georgia, to give them an outlet to express any of their feelings as to whether the things happening nationally are impacting them locally, said Business Manager Geniece Granville.
- Alpha Medias KXL-FM Portland Ore. personality Lars Lawson held a fundraiser for law enforcement on July 15 to benefit the National Law Enforcement Officers Memorial Fund. We are extremely excited about hosting this event and letting Law Enforcement Officers know that there are many people who truly support them and sincerely appreciate the job they do each day, said Operations Manager Bruce Collins.
- Summit Medias WBHK-FM Birmingham hosted a Silence the Violence Rally on July 14.