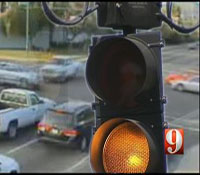 Cox Media Groups ABC affiliate WFTV Orlando investigated Attorney general Pam Bondis involvement in a local red light camera case. A local driver, who is fighting a red light camera ticket, said he was shocked when the highest law enforcement official in the state took an interest in his case. But court documents obtained by the station show that, in part, the motivation for Bondi is money. The 9th Circuit has already ruled in previous cases that companies cant replace cities and counties. The question: Can drivers use that as a defense to get tickets tossed? And, if they can, how much money does the state stand to lose?