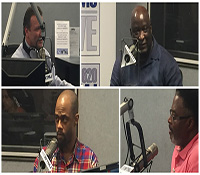 Scripps WTMJ-AM Milwaukee held a community conversation regarding social unrest on August 17, following violence and protests over the shooting death of an armed black suspect by local police. The special served as a forum for local residents, clergy, politicians and police to discuss life in the most challenged areas of the city. The violence that erupted this week is a reminder of the struggles many face in our community. WTMJ Radio will lead the way for a productive listening session, where leaders can get together and offer solutions. Now is not a time for finger pointing, its a time to listen, VP/GM Tom Langmyer said. In addition to being aired on WTMJ, it was streamed on the stations website and via Facebook Live.