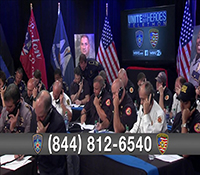 Manship Stations ABC affiliate WBRZ-TV Baton Rouge raised $185,000 during the Unite for our Heroes Telethon on July 28. All the funds were placed directly in our long-established First Responders Fund, which will benefit victims and their families who need help now and in the future, said John G. Davies, president and CEO of the Baton Rouge Area Foundation, which manages the fund. Law enforcement and community leaders, including Gov. John Bel Edwards and Mayor Kip Holden, participated in the telethon.