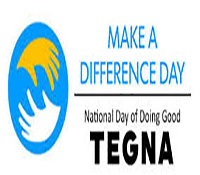 TEGNA stations across the country participated in the companys 25th annual Make a Difference Day, one of the largest annual single-days of service nationwide, held October 22. Here are a few examples: