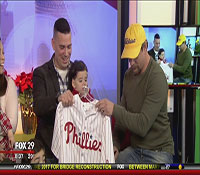 Foxs owned-and-operated WTXF-TV Philadelphia partnered with major league baseball team the Phillies to honor Anthony Conly, an area man who had been honorably discharged from the Army in 2002. He received a signed glove, jersey and was invited to attend the Phillies Phantasy Camp.