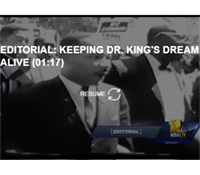 Hearsts NBC affiliate WBAL-TV Baltimore President and General Manager Dan Joerres produced an editorial honoring the legacy of Dr. Martin Luther King Jr. and Jeff Pitts, founding father of the Baltimore Westsiders. The programs aired January 16, MLK Day. Founded in 1962, The Westsiders are the first and oldest community marching band and have provided thousands of youth with a structured, safe environment and the opportunity to travel.