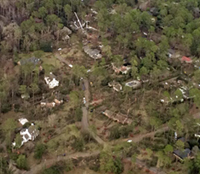 About 38,000 people were without power and turned to WALB digital reports for days. WALB had 232,080 total video views the week of January 2, compared to 66,953 the week before. Many viewers thanked WALB for providing alerts in time for them to get into their safe room. WALB also received hundreds of phone calls seeking information. Some said they had trouble reaching city officials, but knew they could connect with newsroom staff. Examples of the storm coverage include these photos and this video .