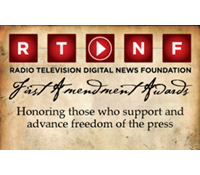 The Radio Television Digital News Foundation (RTDNF) announced the recipients of its 2017 First Amendment Awards. "At a time when freedom of the press is facing unprecedented challenges, our honorees stand up for values that are critically important to democracy," said RTDNF chair Kathy Walker.