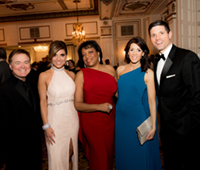 In addition, WCVB has been the annual media sponsor of the Ellie Fund Red Carpet Gala for close to 20 years. The exclusive viewing of the 89th Annual Academy Awards on February 26 raised $300,000 for breast cancer support services. WCVB anchors Ed Harding, Maria Stephanos, Emily Riemer and Ben Simmoneau emceed the event and posed on the red carpet with guests. The Ellie Fund hosts the only officially sanctioned Academy Awards party in Massachusetts.