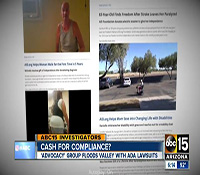 Scripps ABC affiliate KNX-TV Phoenix received a regional Edward R. Murrow Award for its investigative series Cash for Compliance. Reporters produced more than two dozen stories that highlighted how non-profit Advocates for Individuals with Disabilities exploited a civil rights law to make money. As a direct result of the series, the Arizona Attorney Generals office intervened and the state is now pursuing fraud allegations against the group. Cash for Compliance is an example of how journalism continues to be a society watchdog, said KNX-TV News Director Chris Kline. Every story the ABC15 Investigators produce reflects our commitment to make Arizona a better place to live.