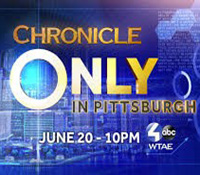 Hearsts ABC affiliate WTAE-TV Pittsburgh aired Chronicle: Only in Pittsburgh on June 21 to show how the city that once faced collapse has reinvented itself. The program showcased the key role Pittsburgh will play in the world over the next several decades, highlighting local innovators and the fusion of technology and education. This installment of Chronicle proves that the Steel City is more than ready to help write history, said General Manager Charles W. Wolfertz III.