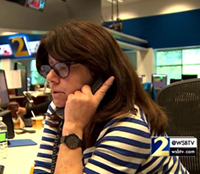 Cox Media Groups ABC affiliate WSB-TV Atlanta helped Cobb County police rescue two hostages in a bank on July 7. Brian Easley called the station and told Assignment Editor Stephanie Steiger, I have a bomb and Im holding people hostage. Steiger listened to Easleys complaints about the Department of Veterans Affairs for 45 minutes while WSB conferenced in a police negotiator. Chief Mike Register said Steiger did a "great job" keeping Easley calm. Police the information from the call to rescue all hostages. WSB did not report the story on air or via social media during the incident. "These hostages and that mans safety were our first concern, said News Director Misti Turnbull. We were behind our competition in reporting the story publicly, but winning the reporting race was not the priority at that moment."