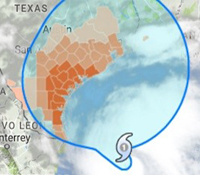 Hurricane Harvey landed on the southeast coast of Texas on August 26, dumping more than 50 inches of rain in four days. Harvey dropped 19 trillion gallons of water, killing dozens and sending 30,000 people to emergency shelters. Radio and television stations across the country provided life-saving wall-to-wall emergency information and storm updates, with reporters risking their own safety to provide coverage. Broadcasters provided wall-to-wall coverage, with staff staying at flooded stations, sleeping in hotels and overcoming technical difficulties to stay on air and keep listeners informed. The FCC reported that as of mid-day on August 27, no TV station had been knocked off the air. Broadcasters also went to great lengths to raise millions of dollars for hurricane relief efforts.

Broadcasters and other news outlets have also played a critical role in conveying emergency information, and in some cases, even coordinating live, on-air rescues, said FCC Commissioner Ajit Pai. Everyone who is pitching in deserves our gratitude and support. Were all in this together.

In an interview with TEGNAs CBS affiliate KHOU-TV Houston, Vice President Mike Pence said, Well, first, let me thank you, and let me thank this station, and all the great local media that has been working, I know, around the clock, to get real time information to those that are struggling in the aftermath of landfall for Hurricane Harvey and now dealing with the historic flooding.