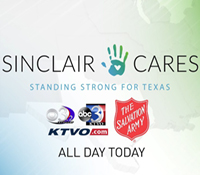 Sinclair Broadcast Group and its 173 television stations partnered with the Salvation Army to raise money for relief efforts. Sinclair stations launched a Standing Strong for Texas relief effort on September 1, raising $1.4 million. In a time of crisis, the most important role of local television news is the communication of critical information to an audience in real time, said President and CEO Chris Ripley. We recognize how much people rely on their local television stations and that coverage doesnt end once the storm is over. We are committed to helping these communities rebuild and to living our mission to alert, protect and empower our viewers.