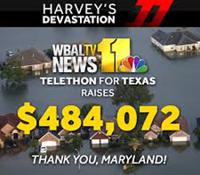 Hearsts NBC affiliate WBAL-TV Baltimore raised $484,000 in a telethon, held August 28-31, to raise money for American Red Cross relief efforts. The results of our telethon have been overwhelming. WBAL-TV has been pleased to offer our viewers an outlet to help in the relief efforts aimed at Texas and the Gulf Coast, said WBAL President and General Manager Dan Joerres