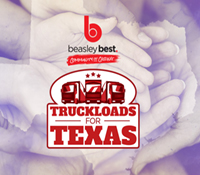 Cox-owned Atlanta stations - WSB-AM/FM, WSRV-FM, WALR-FM, ABC affiliate WSB-TV - and the Atlanta Journal-Constitution filled 10 semi-trucks with 500,000 of bottles of water during the Convoy of Care initiative.

Over 30 Chicago stations simultaneously aired a :60 second spot in English and Spanish to promote the American Red Cross on August 30 at 4:29 p.m. The Radio Broadcasters of Chicagoland are proud to unite as a group to help the people of Houston impacted by the devastating floods, said Matt Scarano of the Illinois Broadcasters Association.

The Alabama Broadcasters Association (ABA) promoted a united effort for stations across the state to encourage donations on September 1. The ABA sent radio and television stations a list of suggested organizations to promote to their audience, along with a graphic for websites and for television stations to use on air.