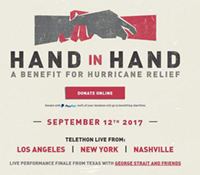 The star-studded Hand in Hand telethon, held September 12 in New York, Los Angeles, Nashville and San Antonio, raised $14 million for Hurricanes Harvey and Irma relief through organizations such as the United Way and Save the Children. ABC, CBS, NBC, Fox and Univision carried the program, which was also streamed online. Cumulus/Westwood One broadcast a full simulcast of the audio. Network morning personalities Matt Lauer, Norah ODonnell and Michael Strahan stood before a satellite image of Irma to describe the devastation. An additional $30 million was donated during the hours that followed, bringing the total to $55 million.