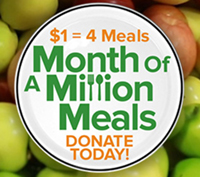 Scripps ABC affiliate KGTV-TV San Diego raised more than $1 million, enough for more than four million meals, in a month-long drive held last December. KGTVs fifth annual Month of a Million Meals was held in partnership with Feeding San Diego. We are so impressed with the generosity of San Diegans, said General Manager Joel Davis. They gave so much we more than quadrupled the original goal.