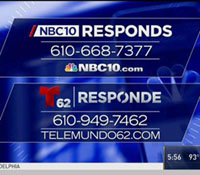 Consumer investigative teams at local NBC and Telemundo stations have recovered more than $20 million for consumers since 2014. The NBC Responds and Telemundo Responde units have answered more than 250,000 consumer inquiries. For example, Telemundo Arizona helped a woman recover unpaid wages from her former employer so she could pay for medical care. NBC Chicagos recovered more than $190,000 after discovering that certain couches contain bonded leather, an imitation material. As many communities continue to recover from recent natural disasters, our consumer teams are helping viewers navigate through the rebuilding processes by providing them with direct help or delivering vital information through their reporting, said NBCUniversal Owned Television Stations President Valari Staab.