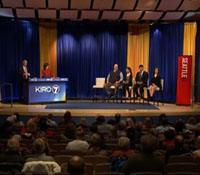 KIRO 7 is committed to taking our viewers in-depth on important local issues, and delivering the story in balanced and impactful ways like we did with the Live Town Hall, said Vice President and General Manager Greg Bilte.