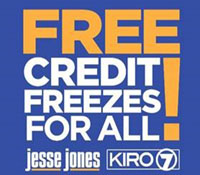 Cox Media Groups CBS affiliate KIRO-TV Seattle investigative reporter Jesse Jones won his fight for "Free Credit Freezes for All" on March 13, when Governor Jay Inslee signed Senate Bill 6018 into law. Jones began producing an investigative series after credit bureau Equifaxs data breach impacted the personal and financial data of 147 million people. The company waited months to notify consumers. Within a few months, Washington residents will be able to freeze and unfreeze their credit file with the three major credit agencies without having to pay a $10 fee.

Its why we do this. Its why I do this. Making real, actual, and lasting change, Jones said.

Every news story we report on, every investigative piece we pursue, every element of our local programming is produced with the need of the viewer as our primary focus, said Vice President and General Manager Greg Bilte. We couldnt be prouder of Jesses team for their passion and dedication on behalf of Western Washington consumers. KIRO 7 will continue to provide the resources and platforms for Jesse and everyone in the newsroom to pursue the issues that will positively impact peoples lives.