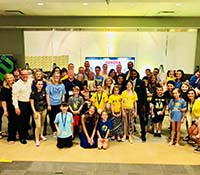 CBS Television Stations KYW-TV Philadelphia held their 12th annual Alex Scott Telethon, a 14-hour on-air benefit for the Alexs Lemonade Stand Foundation, on June 14. The event raised a record $7 million for pediatric cancer research. Over its 12 years on-air, the event has raised nearly $32 million for the cause.

The Alexs Lemonade Stand Foundation was started by four-year-old terminal cancer patient Alexandra Scott, who held a lemonade stand to raise money to help find a cure for all children with cancer.