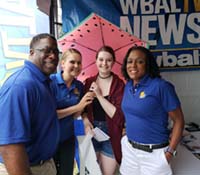 Hearsts NBC affiliate WBAL-TV Baltimore held a four-hour seminar on July 27 for the Baltimore City Schools Student Media. Students took a station tour, viewed a live newscast and watched the taping of the weekly public affairs program. They also interacted with and asked questions of WBALs media professionals. We were thrilled to host these incredibly talented students and look forward witnessing their collective contributions to broadcasting in the coming years, said President and GM Dan Joerres.

WBAL also participated in the 37th annual Artscape, a three-day festival drawing hundreds of thousands of visitors every July. Attendees received autographed cards and took pictures with on air personalities at the stations media booth. Artscape serves as one of many opportunities throughout the year for WBAL-TV to meet our viewers on their turf  in the communities where they live and work, said Public Affairs Director Jerome Chester.