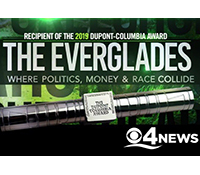 CBS Miamis WFOR won an Alfred I. duPont-Columbia Award for its hour-long documentary, The Everglades: Where Politics, Money and Race Collide. WFOR spent a year exploring the causes of the contaminated algae in Floridas Everglades after the toxic blue-green algae shut down beaches and businesses in 2016, prompting an economic crisis and pitting communities against each other.

The Everglades is a beloved national treasure, said News Director Liz Roldan. We sought to tell its story differently for local news, via an ambitious documentary that shows how politics, growth and pollution have impacted The River of Grass.