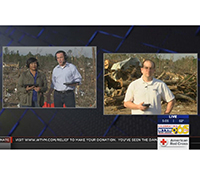 On Sunday March 3rd, a series of several violent tornadoes impacted east Alabama and southwest Georgia. The storm claimed 23 lives in Lee County, Alabama and left a widespread trail of damage throughout Georgia. The next morning, Georgia Governor Brian Kemp declared a state of emergency in Grady, Harris, and Talbot counties.

After the storm had passed, news stations in Georgia and Alabama began working together to aid the victims of Sundays tragedy. Nexstars CBS affiliate WRBL Columbus partnered with Columbus Radio group, PMB Broadcasting for a day-long tornado relief campaign. They set up an online donation portal through the American Red Cross and two donation drop off locations. Together they raised $64,055 to help support the lives impacted by Sundays tornadoes.

WTVM also held a telethon on Wednesday with Gray Television and helped raise $327,000.

The tornadoes destroyed more than 1,000 homes and hundreds of people are currently homeless or displaced.